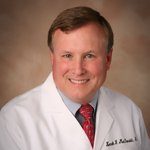 Dr. MacDonald received his medical degree from West Virginia University School of Medicine. He completed his internship and residency at Wake Forest University as well as another residency in General Surgery at East Carolina University where he also served as Chief Resident. Dr. MacDonald is certified with the American Board of Surgery and has practiced medicine for 30 years in Greenville. He has been named to “Best Doctors in America” every year since 2006. Dr. MacDonald joined the practice in 2011. Prior to joining Physicians East, Dr. MacDonald served as president for the American Society of Metabolic and Bariatric Surgery. He also was a professor and the Chief of General Surgery and Surgical Endoscopy until 2007. Currently, he is the Co-Director of the Bariatric Summit and has been since 2006.