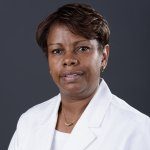 Dr. Alston earned her medical degree in 1987 at the University of Panama in Panama City and completed a residency in Family Medicine in 1994 at McKeesport Hospital in Pennsylvania. From 1994 to 1996, Dr. Alston served as an Attending Physician in the United States Air Force, where she earned the Air Force Commendation Medal for outstanding service to her community. She continues this outstanding service in Eastern North Carolina where she has been practicing family medicine since 1997. Dr. Alston is board certified and holds memberships in the North Carolina Academy and the American Academy of Family Physicians.